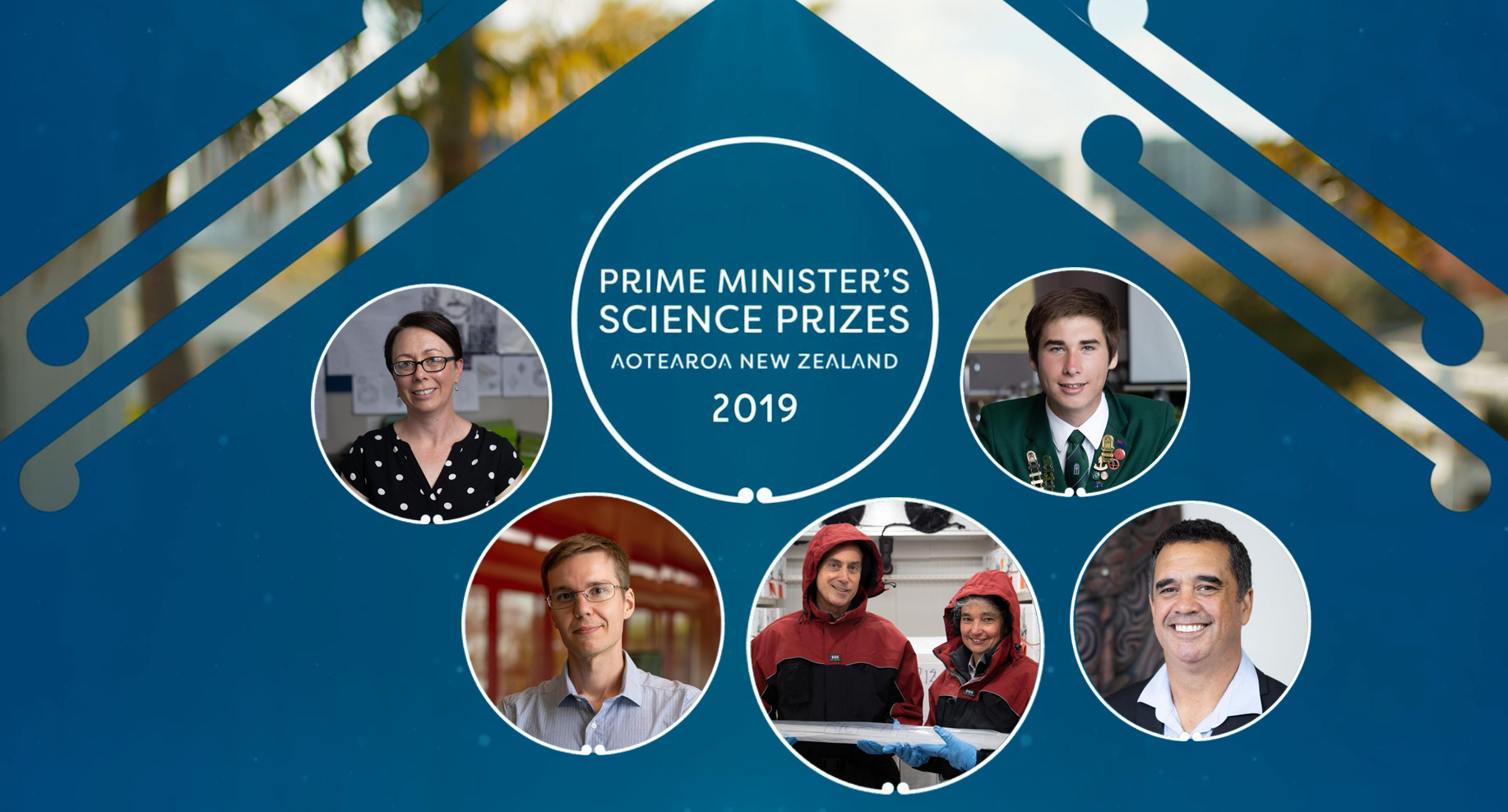 The 2019 Prime Minister’s Science Prizes have been announced in a digital livestream event today.

The Prizes recognise the impact of science on New Zealanders’ lives, celebrate the achievements of current scientists and encourage scientists of the future.

The event was postponed in March due to the Covid-19 pandemic and moved to a digital event.

The 2019 Prime Minister’s Science Prize, the premier award for science that is transformational in its impact, has been awarded to the Melting Ice and Rising Seas team, a group of more than 20 geologists, glaciologists, climate and social scientists from Te Herenga Waka—Victoria University of Wellington, GNS Science and NIWA, led by the university’s Antarctic Research Centre Te Puna Pātiotio.

The scientists are behind the break-through discovery that Antarctica’s ice sheets melted rapidly in the past, and could have a significant impact on global sea level rise over the next 80 years.

They found that Antarctic melt due to climate change could contribute to global sea level rise of 1.4 metres by the year 2100, rather than the one metre predicted back in 2013 by the Intergovernmental Panel on Climate Change (IPCC), the United Nations body charged with keeping the world up-to-date on the effects of climate change.

When the effect of land subsidence is taken into account, the rise could be as much as two metres for some places in New Zealand.

They also found that Antarctica’s ice sheet has a stability threshold of 2  ͦC of global warming, and that there is still a pathway to mitigate the impact of sea level rise around the world.

“Their research has made truly outstanding contributions. It is directly relevant to IPCC policy recommendations, and the global attempt to limit CO2 emissions and stabilise global warming below 2°C.”

Team leader Professor Tim Naish from Victoria University of Wellington says the effects of climate change are incredibly urgent. With the new evidence, scientists are moving their focus to communicating with decision makers on how to avoid the worst impacts of climate change, he says.

The other prize winners:

Won by world-leading University of Auckland physicist Dr Miro Erkintalo, who has made pioneering contributions towards the development of new laser technologies. Dr Erkintalo researches and develops new kinds of laser devices that could enable many new and improved applications, including faster and cheaper internet. He has introduced a theoretical model for the description of a new technology that can convert a single laser beam into hundreds or thousands of beams of different colours, known as a microresonator frequency comb. Nominator Professor Roberto Morandotti, of Montreal’s Institut National de la Recherche Scientifique, says “micro-combs” are projected to have a big role in many future technologies and “therefore quite likely to have wide societal impact as well.”

A Tūhoe astronomer who’s raised awareness about the significance of Matariki is the Prime Minister’s Science Communications Prize winner for 2019. Professor Rangi Matamua didn’t realise the significance of the manuscript crafted by his ancestor when first given it, but came to fall in love with Māori astronomy and educate thousands of New Zealanders about Matariki. Through his research, he has discovered a narrative of the Matariki constellation comprising of nine stars. Professor Matamua has drawn a large following on social media with podcasts and videos in English and te reo Māori. His web series reached 1 million views in four months and more than 20,000 people follow his Living by the Stars Facebook posts. In 2019 Professor Matamua presented his work to more than 10,000 people in a roadshow at 21 events in Aotearoa New Zealand and Australia.

Christchurch teacher Dr Michelle Dalrymple is the first maths teacher to win the Prime Minister’s Science Teacher Prize. Dr Dalrymple, Mathematics and Statistics Faculty Head at Cashmere High School, says every student deserves a champion and is devoted to sharing her research and knowledge with other teachers around the country.  She uses engaging and novel ways to connect her students and other teachers into mathematics and statistics, and says a fundamental part of her teaching is incorporating whanaungatanga, or teaching through relationships. Her nominator says her teaching stands out because it is strongly based on cutting-edge mathematics and statistics education research, while providing creative and fun strategies that are inspiring for her students.

A robot that’s designed for elderly and people with disabilities to take wheelie bins to and from the kerb, has won 17-year-old Christchurch school student Thomas James the Prime Minister’s 2019 Future Scientist Prize. A year 13 student at Burnside High School, Thomas designed “Wheelie Drive” after noticing his elderly neighbour and grandparents struggled to use their wheelie bins. For a student who doesn’t study technology or design, Thomas showed great tenacity in researching and problem solving. He used lego models for his first prototype before learning about micro-processors, programming, autonomous navigation and sourcing the many intricate components he needed to build a full-size self-navigating robot. His nominator says he is a very talented engineer who’s developed and produced a system that adult technologists would struggle to design and make.